Forest and I met through Writing Bad a couple years ago, and I had the pleasure of beta reading for him. He’s a fantastic author and shares my love for wolves. 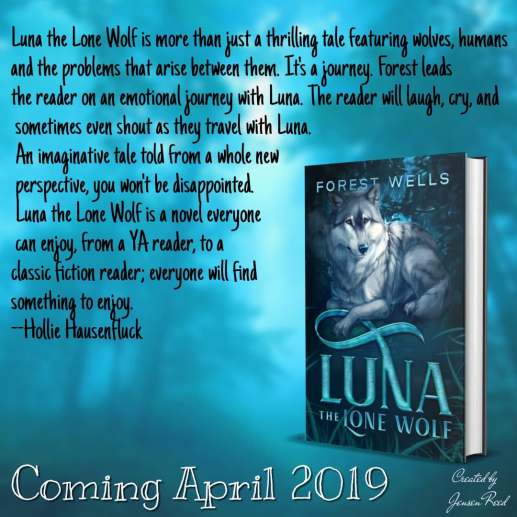 Can you write yourself into a scene of your book? Give us a peek into

the world or meet a character through your own eyes?

Forest Wells at the battle of Phoenix Perch

So much for a peaceful colony. Phoenix Perch was ablaze, with several dead or wounded. I could already feel the muse stirring, ready to use it, but for the moment, all I wanted to do was help however I could.

So far, that entailed me running more than I had my entire life looking for help. I was barely able to breath when I found it, though I did get the bonus of meeting one of those holdrens I’d heard about. Circumstances aside, it was my first encounter with another race. As I regained my breath, it was odd that all I could think about was the fact that when she grabbed my arm, her claws hadn’t pricked me at all.

Soon after she left, a family was put on a cart for the school. They tried to have me join them, but I refused. “No way,” I said. “I’m staying out here where I can be of help. I just need to catch my breath.”

They didn’t argue, and let me do exactly that. I did managed to help another man limp to a cart soon after, though my lungs were still recovering from my two minute mile. Then came more yelling. Interstar wanted any civilians that were, “Uninjured and in full control of themselves” to gather at the North wall. Figuring I matched, I follow others who felt the same, though I did manage to snag a ride on an APC for the sake of my body. Once there, I tried to find out how I could help. As luck would have it, I found the same holdren, who thrust a combat rifle into my arms.

“Head to the far end,” she said. “Wait for the order to fill the gaps and attack”

My head snapped up in shock. “What? Me? I’m a writer not a soldier.”

“Can you use that weapon?”

“That is enough. Your territory stands threatened. Help defend it.”

Even as a writer, I cannot describe her gaze. She looked not just at me, but into me. I found calmness there, certainty. As if her will was the only way things could go. It cleansed my mind of any doubts or fear, and for all my gaming and make believe, I had never pegged myself as being that kind of brave.

I headed for the far end of a gap in the wall. Other civilians, soldiers, even a few fire- fighters, were gathering there. I joined the line, though when a soldier with well-kept locks and a very long rifle joined me, I had to ask one question.

“Do you know the holdren’s name?”

“She’s something else, and not just because she’s a holdren.”

“Nice to fight with you, Sergeant.”

She didn’t react at all, and I was too tight with anxiety to say anything else.

Who is your absolute favorite original character? Why them?

I know many writers say it’s like choosing children, but it’s not like that with me. So I don’t mind saying; it’s gotta be the alien fox, Sundale. I’m not sure why really. Something about the character as a whole, who he is, what he is, how he acts, the things he faces, I don’t know. I find myself more excited than any other when I get to spend time with him.

Do you pour yourself into the characters you create? Which of your characters do you feel has more of you in them than the others?

Not consciously, though my experiences do fuel all of my works to varying degrees. I think Luna probably has the more of my than anyone, though there may be more of me in others than even I’m aware of.

You have a Saturday morning completely to yourself.

How do you spend it?

If it’s on, Esports. League of Legends specifically. I’ll watch the LEC (Europe division), then go to the LCS (North America). Might play a game or two myself, then it depends on a very, very wide range of things. I so rarely get a day totally to myself. So if things are right, I’ll try to write a little. If not, back to gaming, watching episodes of shows no one has heard of, catch up on Youtube channels, and keep an eye on them use in case it realizes we can do some writing after all.

Do you have any dedications in your books? Who are they to and why?

Sure. My first was dedicated to my mom (for obvious, and not so obvious reasons), to three people who helped me stay the course (sadly, only one is still alive), and to the victims of 9/11. Long story there, but 9/11 is what woke the muse, and turned me into an actual writer. a.

To go along with that, is there anyone else you’d like to thank right now that has helped you on your journey as an author?

Just the many more on Twitter, Facebook, and elsewhere that pushed me into things that actually helped. 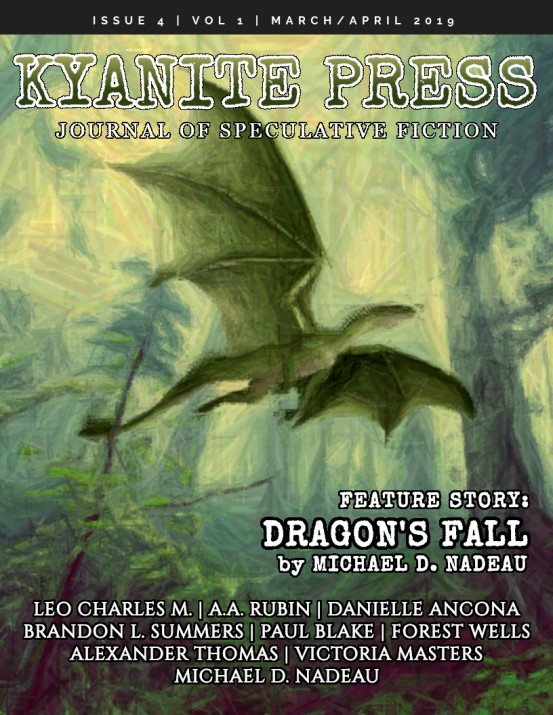 How many unpublished and half-finished books do you have?

What are your plans with them?

Military sci-fi: likely to be a series. INCREDIBLY complex though.

Werewolf fantasy: No sparkling vampires! I promise. I hope to do my own take on them.

Dragon fantasy: I really want to meet this dragon.

Not sure which is next I the writing queue, but all WILL be written someday.

Tell us about your writing process. Where do you start? What do you struggle with?

I’m a cover-to-cover writer. I can’t skip a scene or section, because every little thing, every interaction, every detail, they all build upon each other, and have a tendency to pop up in unexpected ways. I’m also a “pantser”, meaning I write by the seat of my pants. I don’t have a plan. I just write, and see where the story goes, with a few nudges from me to make the best choices.

I world-build as needed, then let the world live on its own. My characters usually come mostly formed, but I sometimes have to get to know them better. My biggest struggle really is getting control of my meticulous nature. My muse often tries to build the world in extensive detail. It helps my worlds live, but it can also get in the way when I have to spend days researching how toothpicks are made (not really, but something that feel as mundane can get in the way if I’m not careful).

How many books/stories/poems have you published?

One short story and two poems in Wolf Warriors anthologies. Another short story in Kyanite Press’s April Issue. And of course, my first novel, “Luna, the Lone Wolf”.

I asked a dozen readers what they wanted to know about authors, and almost all of

them replied “What inspired them to write their story?” Care to share?

Hm, well “Luna The Lone Wolf” started as a sneaky protest book, but the story took the pain I felt growing up, and decided to tell a different, and (I think) better story. So I guess my own path growing up feeling like a lone wolf inspired it, but so did my love for wolves in general. As for the sci-fi that the section above touches on, it all started because, at the time, I felt like there weren’t any heroes that exemplified a line from Duck Tales. “Real heroes just do their job.” Seemed like all of the heroes were (and to a point still are) criminals, misfits, downtrodden, mean, self-centered and/or otherwise massively flawed, or not someone who would otherwise be anywhere near the action if they weren’t the main character. Even if they weren’t, it felt like it was all about looks, not character. They wanted hunks, strong, handsome, and otherwise visually appealing “heroes”. I had a strong desire to “have a hero simply being heroic.” So I made one. Though he brought along some alien foxes that I just couldn’t say no to.

Forest Wells is an author with a deep passion for all things wild canine, as well as pro football, hockey, and e-sports. Forest has authored a short story, as well as several poems,

in the 2015- 2017 editions of the “Wolf Warriors” anthologies, in addition to another short story in the March/April 2019 issue of Kyanite Publishing’s collection of dragon stories. Forest continues to work on his future stories, including a military sci-fi and a fantasy. He currently lives in his home town of Thermal, California.

Anthologies/magazine I have something in:

Wolf Warriors 4; “Light and Shadow Within”