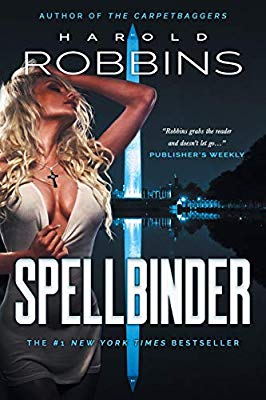 From the author of The New York Times #1 bestselling novel The Carpetbaggers comes a hard-edged look at the seductive, high-stakes and often hypocritical world of religious revivalism and televangelists….

Spellbinder is the story of a genuine and charismatic believer known as “Preacher,” who returns from the foxholes and horrors of Vietnam with a simple goal–to spread the word of peace, love, and charity. He immediately attracts a following as he moves from California communes to small surfing towns. “The Church,” as his mobile flock is now known, is a culture that centers as much on sex and drugs as prayers, sacraments, and salvation.

Despite a growing following, The Church is bordering on bankruptcy. As they reach what is surely the end of the line in Texas, a powerful billionaire witnesses Preacher and likes what he sees. Offered a platform for his heavenly message to reach millions, Preacher takes the leap into the new world of mass broadcasting the gospel.

Before long, Preacher becomes one of the most powerful televangelists in the country, making influential friends and building a vast empire as the newest religious superstar. He finds his new success and status as “the” rock star entertainer of big-top religion intoxicating. Deep inside, though, he realizes that he’s become just another televangelist selling everlasting salvation for an earthly price. Religion professes the only power… Preacher’s power is love, but he meets greed, lust, and corruption from his believers. With a burning conscience, he faces a truly gut-wrenching choice–preserve his empire to continue to spread the word, or become the sacrificial lamb on the altar to expose the hypocrisy surrounding him.

About the author
Harold Robbins (1916-1997) is one of the best-selling American fiction writers of all time, ranking 5th on the World’s Best-Selling Fiction Author List just behind William Shakespeare and Agatha Christie. He wrote over 25 bestselling novels, sold more than 750 million copies in 42 languages, and spent over 300 weeks combined on The New York Times bestseller list. His books were adapted into 13 successful films and television series that garnered numerous Oscar(R) and Golden Globe(R) nominations starring Steve McQueen, Elvis Presley, Laurence Olivier, Bette Davis, Robert Duvall, Tommy Lee Jones, and many more. Robbins’s personal life was as fascinating to the public as his novels. An enthusiastic participant in the social and sexual revolution of the 1960s, Robbins cultivated a “playboy” image and maintained friendships with stars including Frank Sinatra, Clint Eastwood, Tony Bennett, and Sammy Davis, Jr., and was one of the first novelists to be prominently featured in gossip magazines, earning him the title of “The World’s First Rock Star Author.”